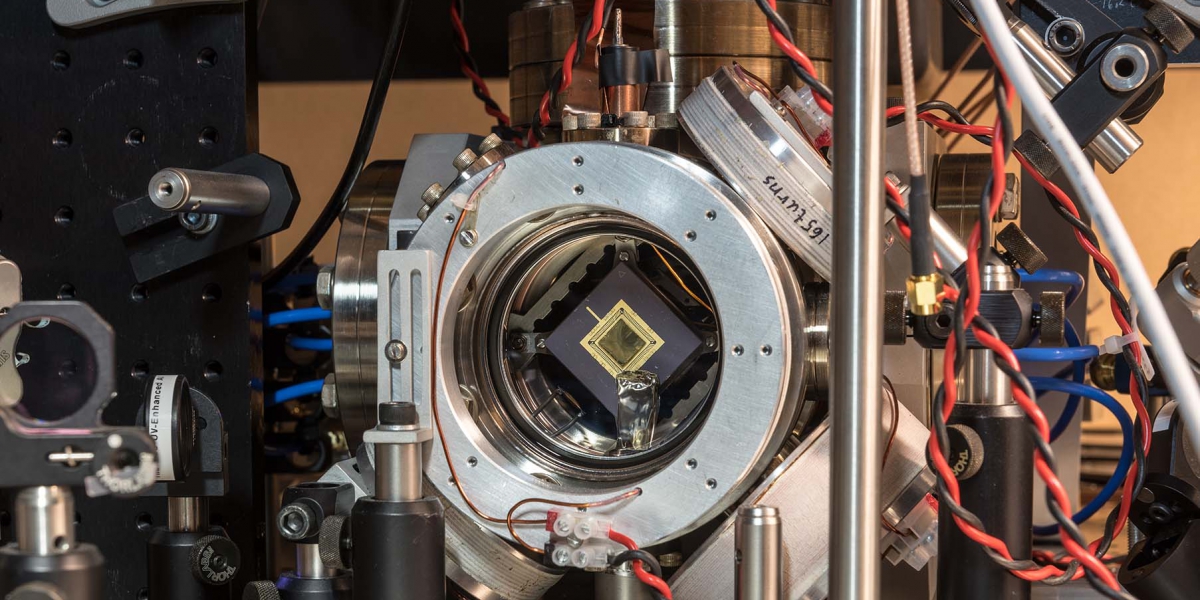 The Q20:20 machine will use positively charged atoms, or ions, as quantum versions of the traditional computer bit. Two energy levels of each ion are selected to represent the ‘0’ and ‘1’ qubit (quantum bit) states. Microwave or laser radiation can be used to excite the transition between the two qubit states and to perform logic gates between qubits. The Oxford Ion Trap group has recently demonstrated the world’s highest-fidelity (lowest error) quantum logic gates between two ions in both microwave-driven and, concurrently with NIST in the USA, laser-driven systems.

The Q20:20 machine will be built from modules consisting of several ions suspended in electric potentials generated by devices called ion traps. Calcium ions in the modules will act as ‘memory ions’, storing quantum information. Strontium ions will serve as ‘interface ions’; photons emitted by these ions will be used to transfer quantum information between modules of the computer.

This year, the Oxford team demonstrated two key ingredients required to implement this photonic interface: the generation of quantum entanglement between an ion and a single photon, and a quantum logic gate between a calcium ‘memory ion’ and a strontium ‘interface ion’.

The team at Sussex are working on more complex ion trap designs that will allow individual ‘processors’ to perform more complex operations in the future, and methods to connect these up to create large-scale computers. Early in 2017 they published a blueprint for such an architecture that features two recent inventions by the Sussex team, both having the potential to greatly simplify the construction of large-scale quantum computers.

The Sussex team invented a simple method whereby voltages applied to a quantum computer microchip are used to execute quantum gates, potentially replacing many laser beams or individual microwave fields that would otherwise be required to build large-scale quantum computers.

The second invention consists of a new method to connect individual quantum computing modules.  Instead of using photonic interfaces, this innovation introduces connections created by electric fields that enable actual ions to be transported from one module to another. This has the potential to create large processor ‘arrays’ without the need for optical interconnects between them, simplifying the path to large scale quantum computers.

Quantum logic gates, the fundamental information processing function of a quantum computer, can be done with many different types of quantum system – NQIT is working on several, including ion traps, superconducting qubits and NV centres in diamond.

Within ion traps, NQIT is working on two different technology approaches for controlling the ions to perform logic operations: lasers and microwaves. Microwave ion trap devices can either use near-field microwaves or far-field microwaves – both are being explored by NQIT researchers.

Currently, laser-controlled quantum logic is the most mature technology of any quantum computing platform, with 99.9% fidelity having been achieved for two-qubit gates [1]. Microwave-controlled trapped-ion quantum logic is slightly behind this, with near-field achieving 99.7%, as demonstrated in a recent paper by Harty et al. [2] and far-field 98.5%, as demonstrated in the recent paper by Weidt et al. [3]. NQIT researchers hold the world record in both types of microwave quantum logic with experiments using the near field approach carried out by NQIT researchers at Oxford University and the far-field approach being implemented by the NQIT team at the University of Sussex

The minimum threshold for fault-tolerant quantum computing lies at around 99%, so currently the far-field microwave approach would not quite be sufficient; however, the precision of microwave techniques has advanced rapidly in recent years, as the plot below illustrates:

NQIT researchers at Sussex expect to cross this threshold within the next few months. The approach using far-field microwaves allows for a fundamentally different approach for trapped-ion quantum computing that uses voltages to execute quantum logic gates, rather than lasers. This new approach is based on individually-controlled voltages applied to each logic gate location, analogous to a traditional transistor architecture within a classical computer processor. When implemented, it would allow a substantial reduction in the number of laser beams required.

In the long-term, microwaves might be the more practical solution for creating large-scale quantum computers because microwaves can be controlled using conventional electronics, whereas laser-controlled ion traps require multiple laser beams, which could require more complex fabrication and thus be more expensive.