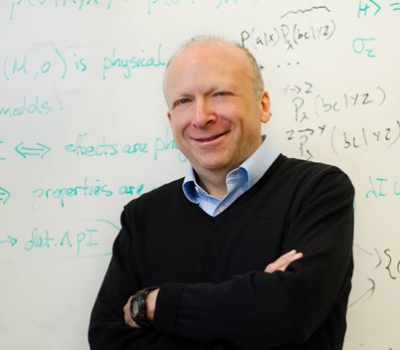 I have been working on high-level methods for quantum computation and information. I pioneered categorical quantum mechanics with Bob Coecke. More recently, I have been working on a unified sheaf-theoretic approach to non-locality and contextuality. This has led to a number of developments, including a novel classification of mulitpartite entangled states, cohomological characterizations of non-locality and contextuality, a novel characterization of no-signalling involving signed measures (negative probabilities), and a unifying principle for Bell inequalities. There are also striking connections with a number of topics in computer science, including relational database theory, computational complexity and dependence logic. This is ongoing work, with a number of collaborators including Adam Brandenburger, Lucien Hardy, Shane Mansfield, Rui Soares Barbosa, Ray Lal, Phokion Kolaitis, Georg Gottlob, and Jouko Vaananen. Theoretical work on hybrid architectures using the prover-verifier paradigm to support scalability of our architecture by combining clients with limited resources with quantum servers to yield a verifiably quantum advantage.